Jarvis makes an exhibition of himself…again!

Jarvis Cocker took over Shoreditch’s Village Underground for three days of workshops, jamming, cake eating and informal performances.  Taking lead from his ‘happening’  at Galerie Chappe in Paris earlier this year, Jarvis invited everyone to bring their own instruments and take part in yoga, burlesque and Jivamukti yoga sessions, all taught by instructors, with Jarvis and his recruits providing the soundtrack.  Or you could just come to watch and munch on home-made chocolate cake and curly wurlys from Jarvis’ personally overseen Tuck Shop and chillax on big inflatables.

He couldn’t have picked a better venue than Village Underground, with its disused railway carriages and excellent acoustics. It is housed under a viaduct, like a mini version of The Arches in Glasgow, and it felt a lot more welcoming and comfy than the overly-lit, white box setting of an art gallery. 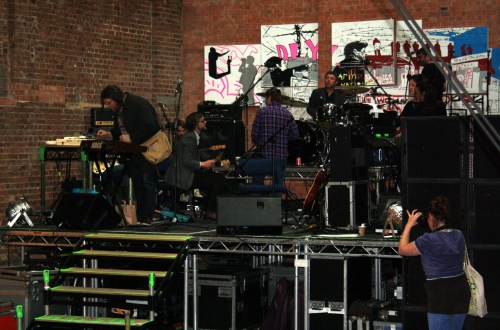 I dropped by during the ‘Bring your own Instrument’ session and Jarvis was perched on a stool playing guitar with members of his band and audience members. They seemed to be mostly improvising, creating dreamy sound scapes, although it sounded very together, like they’d been playing together for years.

Throughout the residency, Charley from the nearby Pure Evil gallery worked on a large graffiti piece dedicated to the 20th anniversary of the fall of the Berlin Wall, which provided the backdrop on the stage.  He was still adding the finishing touches during the final concert!

I hadn’t made plans to go to the concert, as I thought it must have been sold out, but there were still tickets left to buy at the venue (£30 seemed like a lot, but then again, the rest of the festivities had been for free).

Support came from American anti-folk nutter Thomas Truax, who had a whole menagerie of pimped up, hand-made instruments, which look like futurist noise machines.  Truax started out as a solo performer in 90s New York alongside the likes of Beck and Lach and worked as an animator on MTV’s Celebrity Death Match before decamping to London.

Thomas plays everything himself and records each instrument live, layering up the different sounds, then singing and playing blues guitar over the top. He played experimental songs from his latest album Songs from the films of David Lynch, including a cover of I Put A Spell On You from Lost Highway.  The folk at the front were pretty into it, but there were some sceptical mutterings from the oldies at the back, who were probably hoping Jarvis would enlist one of his famous mates to open for him.

Finally, Jarvis appeared and played songs from his two solo albums Jarvis and Further Complications.  He appeared as skinny and bookish as ever, but when Jarvis starts singing, he is utterly seductive with that inimitably sexy voice and and quiet Northern charm.

There was plenty of bum wiggling and thrusting going on and at one point, he led the audience into a quick aerobics session, as keeping fit seemed to have got pushed off the daytime schedule.

His new songs are more rock based and have a cool cosmic sound that goes into prog-rock indulgence in the slightly comical Pilchard, complete with interactive dance routine.  Further Complications has some hilarious lyrics but there’s an underlying melancholy and feeling of disappointment that could be attributed to the break-down of his marriage to Camille Bidault-Waddington earlier this year.

Jarvis’ main preoccupation of the night was making sure that everyone had enjoyed the workshops and most important the Tuck Shop.  He was concerned that the Roast Beef Monster might not be to everyone’s taste and proceeded to hurl packets of Love Hearts into the crowd.

All photos by Steven Marshall.