Everyone at London Fashion Week seemed to be clutching an invitation to Steve J and Yoni P’s ‘Puppet Theatre’ presentation and even the great Diane Pernet popped in to check out the duo’s new collection.

Their innovative presentation, held in the Korean Cultural Centre, was inspired by the Eastern European marionette culture (I’ve witnessed it in Prague and it’s terrifying).  The atmospheric ‘puppet theatre’ was full of lifeless but cheekily well-endowed puppets sporting strategically place fruits and solitary pieces hung on rails,  illuminated by light and shadows. 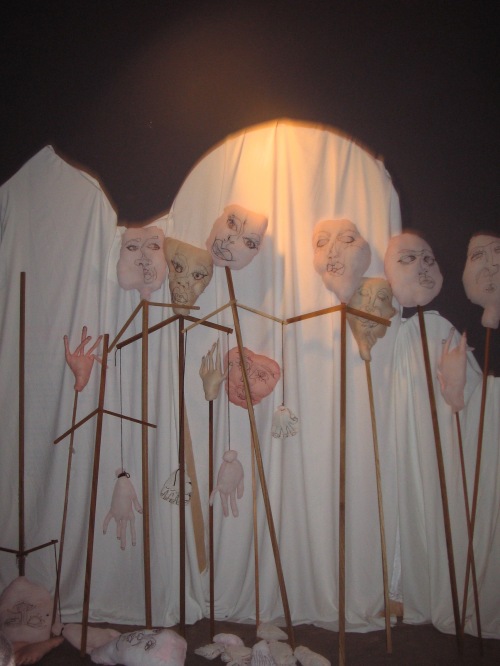 As for the new collection, there were ‘let’s go boating’ soft tailored jackets, structured dresses with two-tone lapels and detailing, pretty 50s-inspired underwear as outerwear, screen printed tees and khaki shorts for guys.

The show was set up as a ‘still life’ with models staring ahead and draped over chairs, serenaded by harpist Serafina Steer.  Many of the models had branch markings ‘tattooed’ on their arms and faces and some had their fluffy angel hair and hands tainted with red dye.

You really need to see it to understand, so check out a clip of the Puppet Theatre presentation…

Their Autumn/Winter 09 collection is also worth a look – it’s full of cosy tartan smocks, Aztec print cardies and purple day dresses.   Stockists: My Sugarland and supersweet.

Lock me up, baby!

Backpacking around Eastern Europe with 3 of my uni friends was one long blur of pivo, art galleries, Becherovka and oddly enough, churches.  I have my friend Maeve to thank for booking us into a prison (bear with me here) rather than another terrifying hostel with ghosts, crying babies and complementary pills between the sheets.

Hostel Celica in Ljubljana’s defiant Metelkova district used to be a military prison until 1991, but has been transformed by artists, architects and local university students into a technicolour artistic hub. 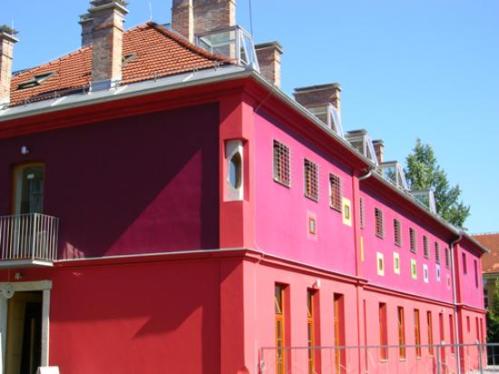 The hostel features 20 cells (they still have the original bars) individually designed by artists and 8 more traditional rooms, just in case the barred windows bring back all too familiar memories for travellers – hey, who am I to judge?

Our favourite area was the oriental cafe, a moroccan den with hookahs and giant pillows, but there is also a cyber cafe and Slovenian ‘gostilna’ to have drinks with your new prison mates before heading into town (a walk of about 700m).

But Hostel Celica’s unusual location is equally intriguing and has a pretty complex political history. Metelkova Mesto is an independent commune in the centre of Ljubljana that incorporates 7 buildings within a former military barracks. Since forming in 1993, the self-described ‘Autonomous Culture Zone’ has fiercely fought against modernisation and the city’s commercial aspirations through creative and physical resistance, but still its future existence relies on keeping the developers and authorities at bay.

The surreal mini city is now home to clubs, art galleries, live music spaces and artist studios and there’s always some kind of party going on.

Keeping with Metelkova’s inclusive spirit, Hostel Celica has a Point of Peace, a room for prayer, meditation and reflection for all religions, which could be useful after a sinful night of partying.  It has even been blessed by influential spiritual leaders in Slovenia.

There are a handful of creative communes still standing in Europe, the most well-known being Copenhagen’s long-standing ‘freetown’ Christiania, but their survival is always hanging on a shoestring.  Staying at Hostel Celica is the best way to experience and culture and parties but still have a comfy bed to go back to – quick though, before it’s too late.

Prague seems to have been reclaimed by stag and hen parties (or so the Daily Mail would have us believe), so visiting a bar named after the most famous purveyor of filth for a cold glass of Pilsner Urquell could be deemed cultural suicide.  Not so, as Marquis de Sade has the louche feel of a downtown bar, despite being a few streets off the old square, and faded decadence

used to be a brothel. underneath is an early 20th century ballroom. ten metre ceiling, now in ruins.
decadent, debauched,
sex on the beach cocktails, absinthe or pivo
off the Old Town Square 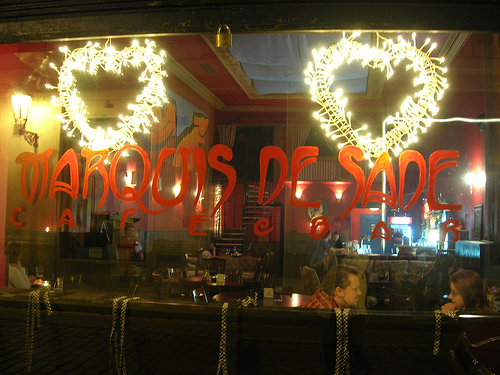