On Monday night I was invited to come and try some delicious authentic Mexican dishes for Mestizo’s Mole Festival and see their elaborate decorations for the dia del muerto (day of the dead).

Mestizo is one of London’s nine authentic Mexican restaurants and judging by the aroma of spices and sizzling meat, I could tell that the meal was going to top my somewhat ‘creative’ Old El Paso concoctions.

We started by ordering some Margaritas (£7.50)  – I went for a smooth frozen one with just the right balance of sweet and sour while Steven’s ‘on the rocks’ version had one hell of a kick to it.

The mirrored bar has an encyclopedic range of over 125 different brands of tequila from dry blanco to limited-edition premium, which you can rarely find out of Mexico. The tequila used in the Margaritas is casco viejo reposado, a wood toned tequila that has been rested in oak barrels for between 60 days and 11 months – perfect for margaritas.

Marysol, the co-owner of Mestizo, recommended that on our first visit, we should try the tamales filled with pollo con mole, followed by the Molcajete ‘Mestizo’.

Mole is very time-consuming to make and every Mexican family has their own special recipe, using anything from 20 to 50 ingredients.  It is prepared all day and dished out for weddings, religious holiday, birthdays and funerals.  There is even an old joke that a newly-wed couple’s first argument will be over mole – ‘my mother’s is better than your mother’s’.

The tamales (£5.40) consisted of dense corn husks, steamed in their skin and filled with pollo con mole.  They had a hearty, dense texture and the chicken mole was deliciously slow-cooked and soft.  They were also served with a pot of sour cream on the side, which helped lighten them up.

Almost every table in the restaurant had ordered the same main course as us and we then understood why – it was the house speciality and was the most impressive-looking dish on the menu.

The Molcajete ‘Mestizo’ is a pot filled with chicken, beef or a mix of both (£14 per person, minimum of 2) with cheese, chorizo, spring onions, cilantro, avocado and mole, served bubbling hot in a stone bowl that looked like a volcanic cauldron.

It came with a selection of flour and corn tortillas, wrapped in a colourful handmade pouch, which you fill with meat, cheese and sauce, roll up and eat like a taco.  The sauce was rich and fiery with strong tomato, chorizo and chilli flavours, as well as subtly blended spices, seeds and nuts, topped off stringy melted cheese and large chunks of vegetables.  We were struggling towards the end, as the pot was just so big, but we polished off all the tortillas, leaving just enough room for dessert. 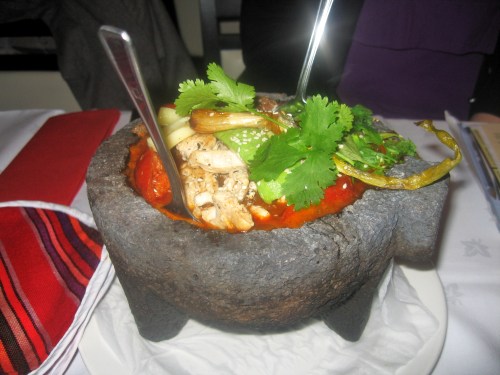 We always end up ordering the same things, perhaps to avoid food envy, but this time we just had to try out two desserts.  Steven went for the Flan Caresro, a Mexican version of crème caramel  with a light cinnamon sauce and strawberries, and I tried the Buñuelos, a large dough fritter with sugar cane syrup and a scoop of vanilla ice cream.

The Flan Caresro cool and light but less creamy and vanilla-flavoured than crème caramel  and the Buñuelos was crisp and golden, with the sugar cane syrup providing most of the flavour. We both had our eyes on each other’s desserts, so we swapped plates, much to the amusement of the beyond ‘eccentric’ couple sitting next to us. 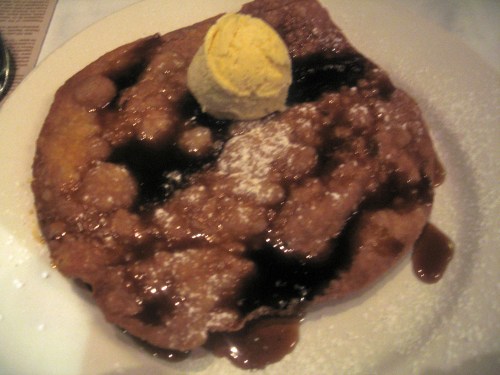 Feeling full to the brim and perked up from all the chilli, we met Bryan, the restaurant Manager, who showed us the downstairs lounge bar and all the decorations for the day of the dead.

Marysol told me that the alter is dedicated to her husband’s friend who passed away and on the table is a photo of him as well as all of his favourite things.  There are bottles of tequila, beer, toys, marigolds, a skeleton mariachi band and sugar skulls, shipped in from Mexico.

On the day of the dead, families have a big fiesta with plenty of the deceased’s favourite food and drink, so they know they have returned ‘home’.  Children give each other sugar skulls and the day ends with music and fireworks. 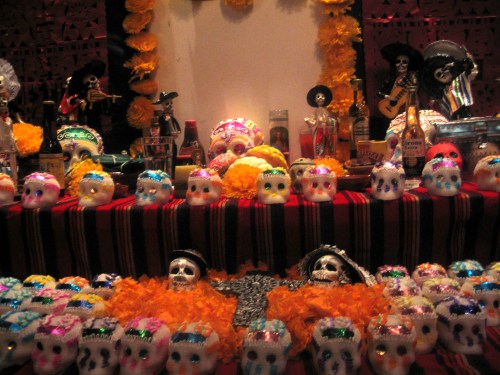 Mestizo are also hosting their first Mole Festival, where you can try one of 12 different varieties each evening.  Mole Poblano is the most well-known, but you can also taste others like Mole Coloradito (a reddish one originaly from Oaxaca), Mole de Tamarindo (a sweet and sour version) and Mole Negro, which is the most difficult to prepare.

You can see many of the ingredients that go into the mole displayed on artisan Mexican plates by the door and there is even a small gourmet section where you can buy authentic Mexican products, in case you fancy testing your own mole mixing skills.

Mestizo’s Mole Festival is an absolute must if you want to try something other than the usual bland Tex Mex-style burritos and fajitas.  The food is outstanding and there are plenty of exciting dishes and specialities on the menu, if you’re already familiar with real Mexican food.  Plus, if you’re a fan of tequila, which I certainly am, then Mestizo is like the holy grail

The staff are warm and friendly and really like to make their own personal recommendations.  You can tell that the owners, Marysol and Adrianna are really proud of their restaurant, and with good reason too!

Mestizo’s Mole Festival is on now until 2 November.  Visit Mestizomx.com for more details.

Sampling some of the world’s finest chocolate in Mayfair sounded like a glorious way to spend a Sunday afternoon, so I headed down to the May Fair Hotel for Chocolate Unwrapped, the first show dedicated solely to delicious cocoa goodness.  It was like entering Marie-Antoinette’s boudoir, with an intoxicating scent of chocolate and tables laden with exquisite morsels and pretty, shiny wrappers – I was in heaven! 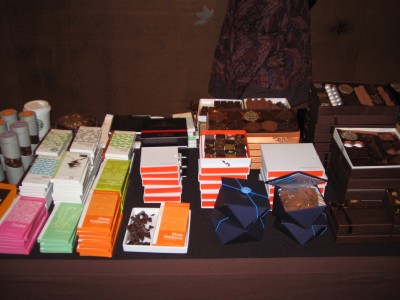 Part of the UK’s Chocolate Week, Chocolate Uncovered featured exhibits from 25 of the country’s most respected and innovative chocolatiers and talks from Rococo founder Chantal Coady, the MD of Hotel Chocolat and Visit Mexico.  Samples were unlimited and plentiful and aside from atempting a full-on sugar coma, you could peruse dessert cookery books from Foyles and admire the incredible chocolate sculptures by renowned artists and chocolatiers.

Being the geek that I am, I had to make it an educational trip, so I attended the talk given by Visit Mexico and the co-founder of the authenic Mexican restaurant Mestizo, on the history of chocolate and its importance in Mexican cuisine.

I discovered that cocoa was drunk by the ancient civilisations of Central America, including the Aztec and Maya communities from as early as 2000BC.  It was taken back to the court of Spain in 1527AD and eventually reached England in the 1650s and, like gin, was used for medicinal purposes.

But the main part of the talk was the celebratory role that chocolate plays in Mexican culture – chocolate skulls are exchanged like Valentine’s roses on the Day of the Dead and mole (pronounced ‘molay’) is laboriously prepared for weddings, funerals and religious holidays. 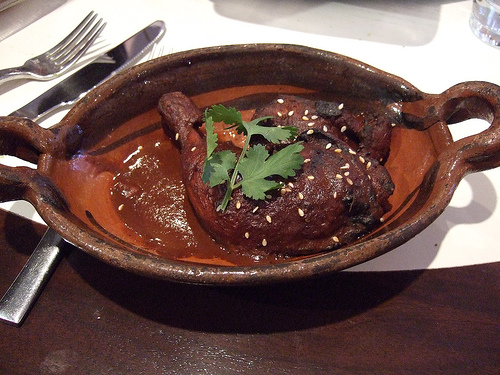 Mole is an aromatic sauce that usually accompanies different kinds of meat and is created using a blend of onion, garlic, tomatilla, dried chilli, nuts, seeds, spices and of course, chocolate.  There are many different kinds of mole originating from various regions in Mexico, all with different colours and flavours.

We sampled the brown Mole Poblano, slow-roasted with chicken and it was one of the most complex, flavoursome sauces I’ve ever tasted.  It reminds me a lot of my favourite Iranian dish, Fesen Joon – a textured sauce made from ground walnuts and pomegranate molasses and served with chicken.

Chocolate Unwrapped’s chocolatiers will be hosting a series of talks, tasting sessions and demonstrations around London for Chocolate Week.  There will be also chocolate-themed afternoon teas and set menus at selected restaurants as part of London Restaurant Festival.

Chocolate Week runs from 12-18 October and events will be held at venues across London.  Check out  www.chocolate-week.co.uk for more details.